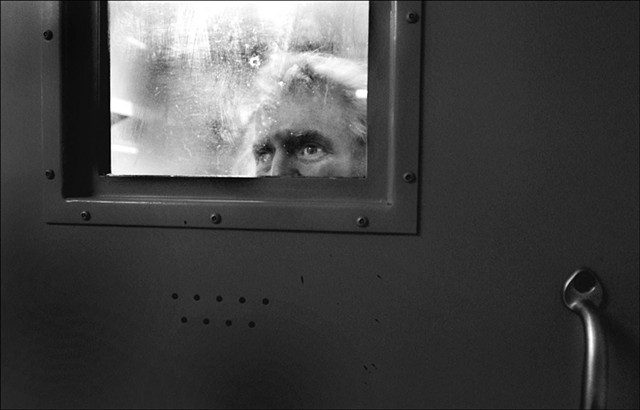 What Does Solitary Confinement Do To Your Mind?
< previous next >

What Does Solitary Confinement Do To Your Mind? APRIL 22, 2014 / by JASON M. BRESLOW

When corrections officials talk about solitary confinement, they describe it as the prison within the prison, and for good reason. For 23 hours a day, inmates are kept inside a cell that is approximately 80 square feet, smaller than a typical horse stable. Cells are furnished with a bed, sink and toilet, but rarely much else. Food is delivered through a slot in the door, and each day inmates are allowed just one hour of exercise, in a cage.

For most of the 20th century, a typical stay in solitary amounted to just a few days, or several weeks in more extreme cases. Today, it’s not unusual for inmates to spend years at a time in solitary. Supporters say the practice helps keep prisons safe, but according to the medical literature, solitary confinement can also take a heavy mental toll.

Does solitary confinement make you crazy? Researchers have found little to suggest that extreme isolation is good for the psyche. In one notorious study from the 1950s, University of Wisconsin psychologist Harry Harlow placed rhesus monkeys inside a custom-designed solitary chamber nicknamed “the pit of despair.” Shaped like an inverted pyramid, the chamber had slippery sides that made climbing out all but impossible. After a day or two, Harlow wrote, “most subjects typically assume a hunched position in a corner of the bottom of the apparatus. One might presume at this point that they find their situation to be hopeless.” Harlow also found that monkeys kept in isolation wound up “profoundly disturbed, given to staring blankly and rocking in place for long periods, circling their cages repetitively, and mutilating themselves.” Most readjusted eventually, but not those that had been caged the longest. “Twelve months of isolation almost obliterated the animals socially,” Harlow found.

Similar studies on human subjects are rare — in part because most modern universities would never consent to them — but in 1951 researchers at McGill University paid a group of male graduate students to stay in small chambers equipped with only a bed for an experiment on sensory deprivation. They could leave to use the bathroom, but that’s all. They wore goggles and earphones to limit their sense of sight and hearing, and gloves to limit their sense of touch. The plan was to observe students for six weeks, but not one lasted more than seven days. Nearly every student lost the ability “to think clearly about anything for any length of time,” while several others began to suffer hallucinations. “One man could see nothing but dogs,” wrote one of the study’s collaborators, “another nothing but eyeglasses of various types, and so on.”

What are the effects on prisoners? In short, not much better. Stuart Grassian, a board-certified psychiatrist and a former faculty member at Harvard Medical School, has interviewed hundreds of prisoners in solitary confinement. In one study, he found that roughly a third of solitary inmates were “actively psychotic and/or acutely suicidal.” Grassian has since concluded that solitary can cause a specific psychiatric syndrome, characterized by hallucinations; panic attacks; overt paranoia; diminished impulse control; hypersensitivity to external stimuli; and difficulties with thinking, concentration and memory. Some inmates lose the ability to maintain a state of alertness, while others develop crippling obsessions.

“One inmate I interviewed developed some obsession with his inability to feel like his bladder was fully empty,” Grassian told FRONTLINE. “Literally, that man spent hours, hours, 24 hours a day it was on his mind, hours standing in front of the toilet trying to pee … He couldn’t do anything else except focus on that feeling.”

Does solitary make prisoners more dangerous? At the very least, solitary can certainly make prisoners much more of a danger to themselves. Inmates in solitary, for example, have been found to engage in self-mutilation at rates that are higher than the general prison population.

Suicide is another major concern. In one study of California’s prison system, researchers found that from 1999 to 2004 prisoners in solitary confinement accounted for nearly half of all suicides. A 1995 study of the federal prison system found that 63 percent of suicides occurred among inmates locked in “special housing status,” such as solitary or in psychiatric seclusion cells. As one inmate cited in the study explained:

The Hole and Segregation cells are depressing enough to drive many men to take their lives in order to escape. For some it would appear to be the only way out. After years of living in the cramped confines of a segregation cell with no hope of getting out, it is easy to see why a man would prefer death.

Are the mentally ill allowed in solitary? Yes. A 2003 report by Human Rights Watch found that anywhere from one-fifth to two-thirds of prisoners in solitary confinement are believed to have some form of mental illness. Justice Department guidelines have recognized that the mentally ill may not be fit for solitary, as extreme isolation may cause inmates’ psychiatric conditions to dramatically deteriorate. In one instance, a mentally ill inmate at the Tamms supermax prison in Illinois declined to the point where he mutilated his own genitalia.

Such effects were among the factors cited in February when a Senate panel called for a ban on the practice for the mentally ill, juveniles and pregnant women.

Is it possible for inmates to adjust? It’s tough. In a study of inmates at California’s Pelican Bay State Prison, psychologist Craig Haney found that prisoners “lose the ability to initiate or to control their own behavior, or to organize their own lives.” Haney, a professor at the University of California at Santa Cruz, attributed this loss to the near total lack of control that prisoners have over their day-to-day lives in solitary.

Often time, he found, prisoners in solitary “begin to lose the ability to initiate behavior of any kind — to organize their own lives around activity and purpose.” What results is chronic apathy, lethargy, depression and despair. “In extreme cases, prisoners may literally stop behaving.”

“I’ve had prisoners tell me that the first time they’ve been given an opportunity to interact with other people, they can’t do it,” Haney told FRONTLINE. “They don’t come out of their cell … And obviously this social atrophy, the anxiety which surrounds social interaction can be extremely disabling and problematic for people who are released from solitary confinement, either released back into the larger prison community, or even more poignantly, released from solitary confinement into the larger society.”